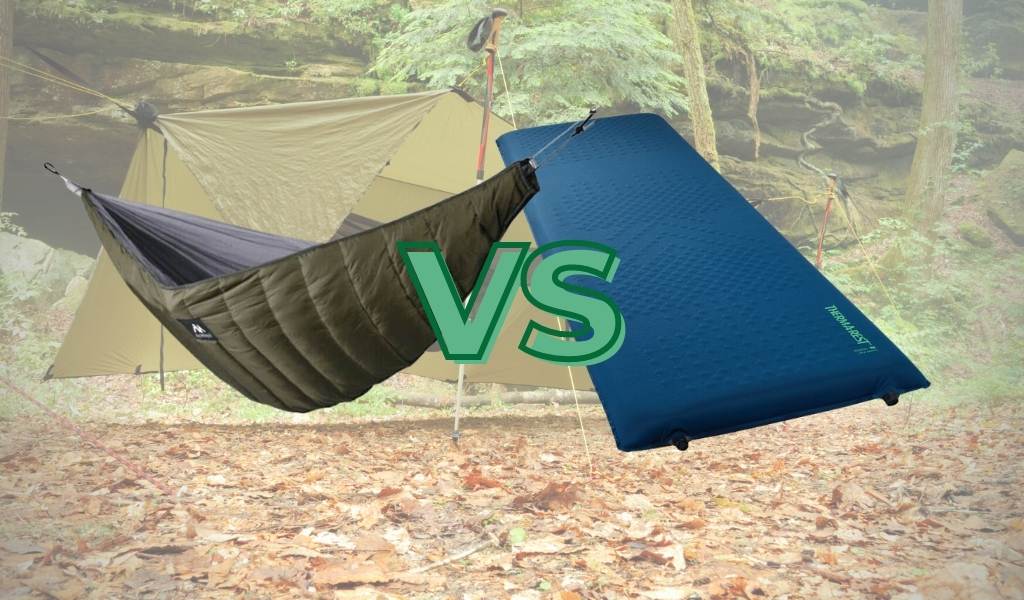 Camping is one of the most enjoyable activities to do in life, especially when there’s a hammock involved. However, there are a lot of things that you need to consider, not least how you’re going to stay warm and avoid CBS (cold butt syndrome).

Some campers will recommend a sleeping pad whereas others swear by a hammock underquilt, but which one is better?

There’s little doubt among most hammock users that an underquilt is a better way of keeping warm in your hammock than sleeping pads. An underquilt does not affect the way the hammock hangs or make it difficult to get into like a sleeping pad does. They are a bit more expensive but well worth it.

Keep reading for my full breakdown of the pros and cons for each option, along with some product recommendations and helpful tips.

Pros and Cons of Sleeping Pads

Sleeping pads (also known as sleeping mats) are used underneath a sleeping bag when camping. They prevent the chill from the ground creeping up at night. Sleeping pads come in all shapes and sizes, some are a basic foam mat that rolls up, whereas others are inflated with air inside that helps with insulation.

In this guide, I’m going to assume that you have a decent self-inflating sleeping pad as these are the most common type used by campers.

If you’ve just transitioned from tent camping to hammock camping, chances are that you already have a sleeping pad to hand so it’s worth testing it out to see if works for you. Even if it doesn’t go so well, at least it hasn’t cost you anything.

Sleeping pads are a staple piece of camping gear so there’s a huge range of brands making them which inevitably has driven the price down.

More versatile – use a sleeping pad in both a hammock and a tent.

Hammock camping is great, but it’s not ideal for all occasions. Personally, I enjoy a hammock for wild camping but when on a campsite I like the privacy offered by a tent.

If you’re like me and move between the two, a sleeping pad can be used for both whereas the underquilt will have little benefit to someone using a tent setup.

Whilst underquilts exist purely for warmth, a sleeping pad performs the dual function of warmth and extra comfort. Hammocks are already comfy enough, but a well-cushioned sleeping pad in the correct position can build on this and provide the perfect night’s sleep.

Difficult to keep them in place.

Positioning your sleeping pad in your hammock is easy, but keeping it in that same position whilst you climb in can be a skill in itself. You will get the hang of it after a while, but it’s certainly a learning curve of trial and error.

Most pads are too narrow.

Most sleeping pads are very narrow which means there isn’t much room to maneuver around without falling off. This can make it hard to stay on the pad, especially when you’re sleeping at a diagonal angle as is recommended for hammock sleepers.

If you shift around at night, you’ll likely end up poorly positioned on the pad and could be woken up by cold spots as your body is pressed against the hammock material.

Take up more space than an underquilt.

Whilst sleeping pads vary in shape and size, as a general principle, they are bulkier and heavier than an underquilt when packed away.

If you’re a serious camper or will be lugging your gear across long distances, every ounce, and inch of space counts.

Pros and Cons of Underquilts

An underquilt is a piece of insulation gear that hangs underneath your hammock. They provide a layer of air which heats up through convection from your body heat and prevents the wind chill from making your back cold.

After the initial setup of an underquilt, there is no further interaction with it required until you take the hammock down. You can get in and out of your hammock freely, knowing that you’ll be nice and snug each time. Compare this to an underquilt which requires re-positioning every time you use it.

No risk of rolling off an underquilt.

If you move around in your hammock at night, there is no chance of an underquilt moving around, it will do its job no matter how you lie. This is compared to a sleeping pad that is easy to roll off and end up with cold spots from the wind chill.

Lighter and more compact to carry.

Generally speaking, a hammock underquilt weighs less than a sleeping pad and will pack down to be much smaller which allows it to fit more snugly in your backpack.

Of course, there will be outliers if you opt for premium backpacking gear, but for most average-priced brands the above is true.

Let’s take a look at two similarly priced examples from some leading brands in both. The REI Trailbreak sleeping pad weighs 40oz and packs away to 6.5 x 20”. Meanwhile, the ENO Ember underquilt weighs 27oz and packs down to 13” x 7”. You are shedding off more than 25% by opting for an underquilt.

More expensive than a sleeping pad.

Underquilts are more expensive than sleeping pads. The top brands with 4-season ratings can cost between $100-300 but even a cheap hammock underquilt can cost $50-100 for something that will perform.

Compare this to around $30 for a sleeping pad and you can make big savings, especially if you are buying for a couple or a family.

Cannot be used with a tent.

For situations where you decide to head out for an impromptu tent camping trip, maybe with the family, or to a festival where there’s nowhere to hang a hammock, you won’t get much use from an underquilt.

If this is likely, you may have to invest in both a sleeping pad and underquilt or settle for sleeping pads only.

So, Is a Sleeping Pad or Underquilt Better?

As you can see from my analysis, both sleeping pads and underquilts have their pros and cons when being used with a hammock.

If you already have a sleeping pad, I’d highly recommend you test it out before investing in an underquilt. You might find that you like it and you’ll probably be able to put up with the downsides for your first few trips.

If you’re planning to go hammock camping frequently or will be hiking long distances with your gear, it’s worthwhile paying that little bit extra for a hammock underquilt as the advantages over a sleeping pad are tremendous.

They are easier to use and there’s no risk that you’ll roll off it in the night like a sleeping pad. They are also more compact and lighter to carry around.

The ENO Ember underquilt offers a good compromise between price and quality that will be suitable for most hammock dwellers.

It has been designed to provide even insulation that doesn’t compress in certain areas. It uses a synthetic filling that is suitable for temperatures between 40° – 60°F.

For more recommendations, see my buyer’s guides to winter underquilts or the best cheap underquilts.

Do You Need a Sleeping Bag with an Underquilt?

An underquilt will only keep the bottom of a hammock insulated and prevent wind chill on your back, or as we call it in the hammocking world, it will stop CBS – cold butt syndrome.

You still need something to keep you warm on top. A sleeping bag is suitable for this, however, the bottom of the sleeping bag will be compressed by your body and won’t provide much benefit so a top quilt is a better alternative.